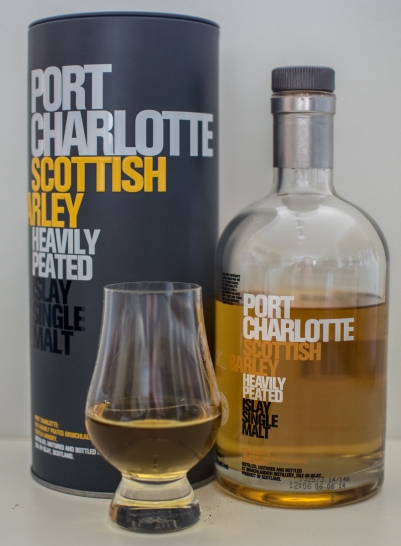 It’s been some years now since Bruichladdich distillery decided to split its range: Bruichladdich for its unpeated whiskies, and Port Charlotte for its peated expressions (plus Octomore for the ultra peaty stuff). This means that at least you know what you’ll be getting with a Port Charlotte: smoke!

Port Charlotte is named after the village close to Bruichladdich distillery, which is where much of its whisky spends time maturing in the warehouses. Port Charlotte Scottish Barley is peated to a level of 40 ppm, placing it in between Lagavulin and Ardbeg in terms of smokiness. The stills used at Bruichladdich use a process known as trickle distillation. Combined with the unusually tall shape of the stills, this creates a clean, floral spirit, so clearly on display in drams such as the Classic Laddie.

The fact this Port Charlotte is made with Scottish barley isn’t really anything special, as most Scotch whiskies are. If you are partial to this kind of sentiment, I suggest you try the Islay barley instead, which is in fact locally grown. Bruichladdich rightfully style themselves as progressive Hebridean distillers, and they really have pushed the envelope with projects such as Octomore (hugely successful) and X4 (a flop), as well as several unconventional cask finishes. There’s not much progressive about the Port Charlotte Scottish Barley though, as this whisky was aged in traditional bourbon barrels – no matter how hand-picked they may be. Instead, the Scottish Barley is a solid Islay dram that’s bound to please.

END_OF_DOCUMENT_TOKEN_TO_BE_REPLACED

For a long time now I had been intending to organise a tasting that includes each of Islay’s eight distilleries, and tonight the time had finally come. Known for its distinctively peaty, smoky whiskies, the island of Islay is often considered a whisky region in its own right. This is no wonder, as the island lives and breathes whisky, providing the lifeblood for a population of just over 3000 people. Peat bogs are ubiquitous, the salty sea breeze can be felt anywhere and the sight of a distillery’s chimney is never far away.