Nikka All Malt was released in 1990 and was a completely novel concept at the time. The spirit is indeed made using only malted barley, but some of it was put through a column still (also known as a Coffey still). The reason this had never been tried before is that in Scotland, anything distilled in a Coffey still would automatically be classified as a grain whisky. So why waste precious barley on a liquid that you couldn’t call malt anyway? Japan of course isn’t bound by Scottish rules, so Nikka decided to give it a try. All Malt was an instant hit in the home market and the fact it’s still available is a testament to its enduring popularity (and affordability). It’s safe to say All Malt has successfully pushed the envelope, even influencing subsequent Nikka bottlings. 25 years later, Nikka Coffey Malt has become popular the word over, using only malt distilled in a column still.

But back to All Malt. Of all the excellent whiskies in Nikka’s range, this is one of the most accessible – both in terms of taste and price. It’s unlikely to blow your mind (try Nikka from the Barrel for that), but All Malt is a nice teaser of what Nikka has to offer.

Let’s face it, Japanese whisky with an age statement is a rare sight these days. And while Nikka has bottled many excellent NAS bottlings over the past decade, it’s great to see this 12 year old stalwart still forms part of the range. With Nikka axing the entire Yoichi, Miyagikyo and Taketsuru line-ups and replacing them with NAS expressions, The Nikka 12 year old now remains the company’s sole bottling with an age statement. I expect the fact that this is a blend rather than a single malt may have helped Nikka to keep it on the shelves, but it’s also a testament to the quality of this whisky. Nikka has a fine reputation when it comes to blending, and this 12 year old fits right in. This bottling comes in some very stylish packaging (although the velvet is a bit too much for my taste), with the design meant to mimic the neckline of a kimono.

Masataka Taketsuru was a legend in the whisky world, so naturally any bottle bearing his name comes with high expectations. Nikka Taketsuru 17 and 21 year old were at the forefront of launching Japanese whisky to international acclaim. Given these high hopes, Taketsuru Pure Malt was perhaps not quite what I’d wished for. Then again, that’s not very fair. Like someone with famous parents struggling to make their own way in the world, Pure Malt should not constantly be compared to its illustrious forebears. So let’s set history aside for a moment and judge this whisky on its own merits. What does Taketsuru Pure Malt have to offer? 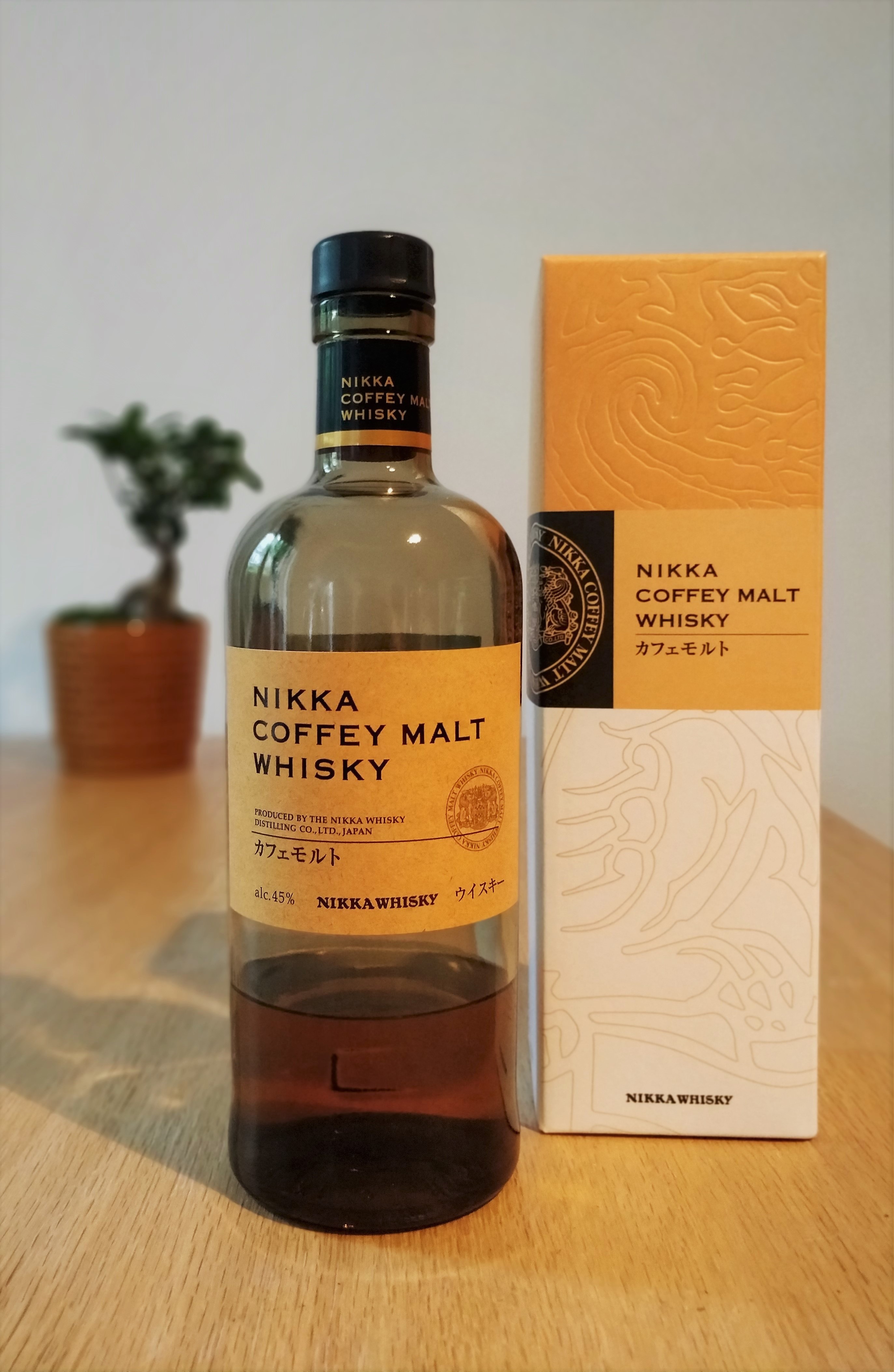 When Aeneas Coffey took his first steps in the distilling world as an exciseman in 1800, he could not have guessed that his name would one day be linked to a range of Japanese spirits. Yet such was the impact of Coffey’s inventions that he is now considered one of the most influential figures in whisky history. Traditionally, distilling took place in pot stills, which have to be cleaned out after each run. To increase efficiency, Coffey designed a column still, which could operate continuously. His patented Coffey still would go on to become the standard for distilling grain whisky, at a time when blending became increasingly popular. Although his patent has since expired, modern column stills are very similar to Coffey’s invention back then, and continue to be named Coffey stills.

END_OF_DOCUMENT_TOKEN_TO_BE_REPLACED 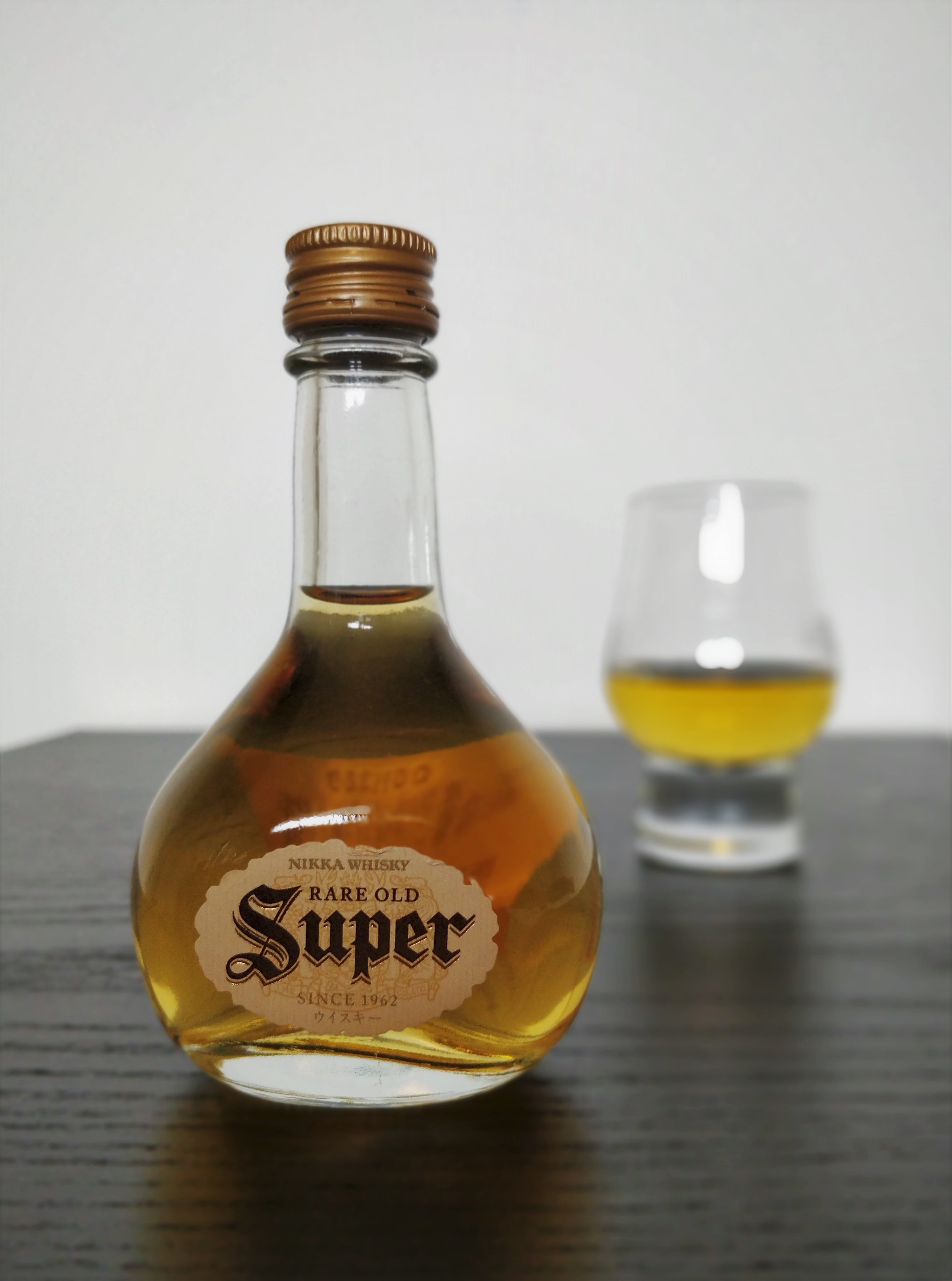 Super Nikka was launched as far back as 1962, during a decade of great optimism in the Japanese whisky industry. Nevertheless, these were sad times for Nikka founder Masataka Taketsuru, whose Scottish wife Rita had passed away the previous year. As a way of dealing with his grief, he poured all his energy into creating a new blend, which he would title Super Nikka. To honour his late wife, he meant for it to be something special. Super Nikka was the company’s most expensive product to date, retailing at ¥3000 per bottle, at a time when a college graduate could expect to earn around ¥18000 a month. The glass bottles were hand blown, each fitted with a glass stopper to add an extra touch of class. The bottle alone reportedly cost ¥500 to make, an extravagance given that many whiskies were retailing for less. As mentioned though, this was a time when whisky was booming in Japan and consumers sure were interested. Around 1000 bottles of Super Nikka were produced each year. All of them sold.

END_OF_DOCUMENT_TOKEN_TO_BE_REPLACED 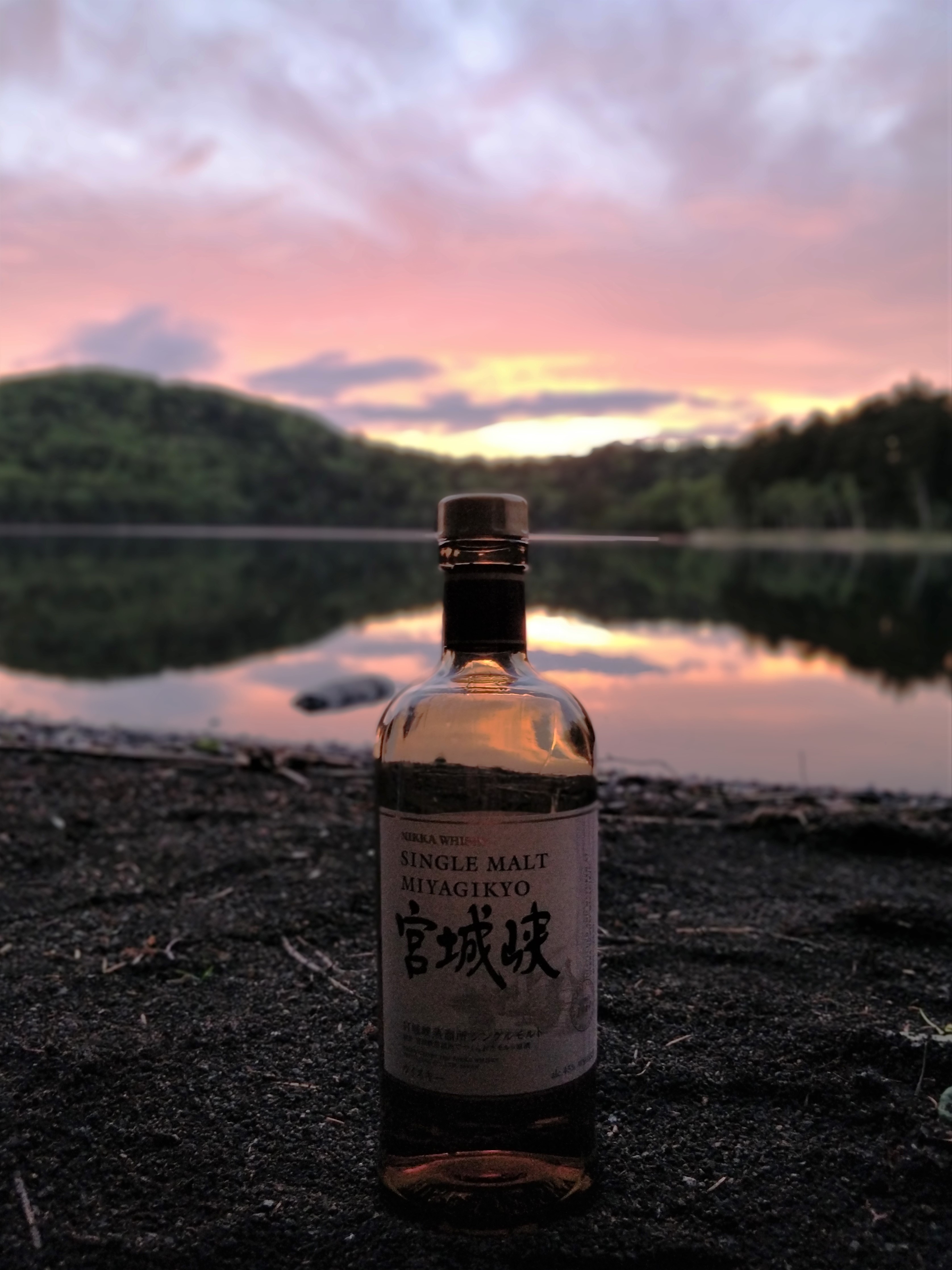 Freshly rebranded, Miyagikyo Single Malt replaces the previous Miyagikyo NAS bottling, as well as the distillery’s 10, 12 and 15 year old expressions. The reasons why are obvious, as skyrocketing demand continues to put pressure on aged stocks of Japanese malt. In fact, Nikka’s other stalwart Yoichi has received identical treatment, with the entire range being replaced by a similar NAS bottling.

Having said that, all signs point to the fact that Nikka has included some older whisky into Miyagikyo Single Malt. This is very much a good thing, and reverses a trend whereby Japanese NAS whiskies were becoming ever younger. A large portion of this dram was aged in ex-sherry casks, complementing the delicate distillery character with sweet, nutty undertones. This whisky was my travel companion during a recent camping trip in Japan, and sure kept me warm and cheerful on some cold Hokkaido nights. So while for me this Miyagikyo scores points for sheer nostalgia, it’s also objectively a very pleasant, rewarding dram that I can confidently recommend to anyone taking their first steps in Japanese whisky.

END_OF_DOCUMENT_TOKEN_TO_BE_REPLACED 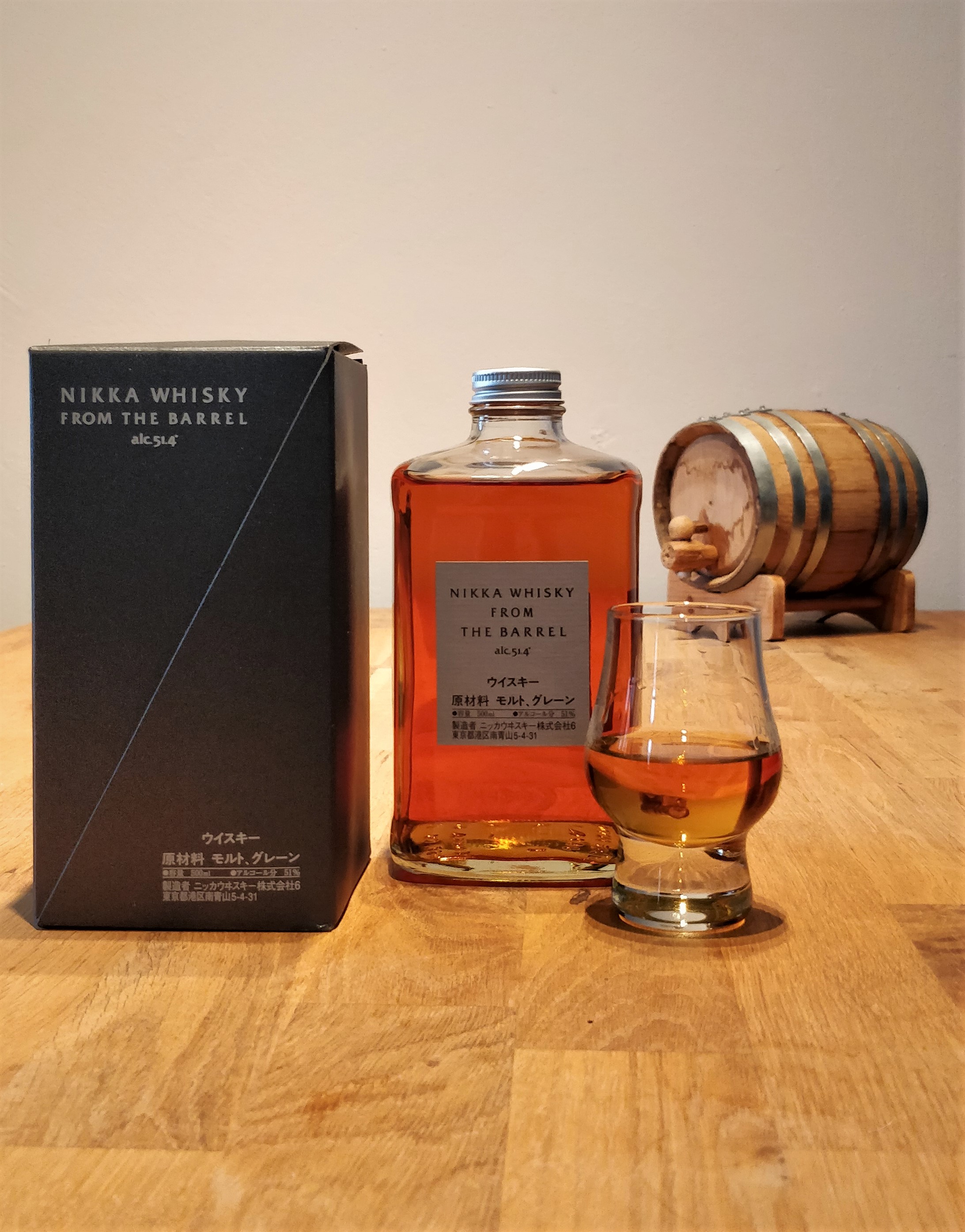 Launched as far back as 1985, Nikka From the Barrel was quite a novel concept at the time. In those days, Japanese whisky consumption was in steep decline and people were more concerned with price rather than quality. Most spirit being sold contained less than 25% actual whisky, with the rest of the mix being made up of blending alcohol. In this sense, From the Barrel was a strange fish in the pond, a whisky full of  flavour at a time when Japanese consumers preferred their whisky light and smooth. The bottling strength of 51.4% was almost unheard of in those days.

Nikka founder’s son Takeshi Taketsuru’s vision was to give the consumer a taste of how a master blender might experience a whisky in the lab. This perhaps explains the unconventional way of blending, and the somewhat confusing name of this whisky. Because Nikka From the Barrel is not in fact a single cask expression, but a blend of which grain spirit from Miyagikyo and malt from Yoichi distillery are the main components. Rather than blending the liquid in a large stainless steel vatting tank, Nikka From the Barrel is placed in… you guessed it: barrels. These previously used casks help to marry the spirit for about 3 to 6 months, after which it is bottled straight from the barrel.

The result is a rich and flavourful expression at a blistering alcohol percentage. Nikka From the Barrel has withstood the test of time, and remains an immensely popular bottling. The packaging is extremely classy, and I love how understated this Nikka looks. The chaps at Master of Malt have referred to Nikka From the Barrel as one of the best value for money whiskies in the world. Given the general price level of Japanese whiskies these days, that’s quite a statement. Is their claim justified? Let’s find out!