Although historically standing in the shadow of its more famous neighbour Springbank, Glen Scotia survived the carnage of the Campbeltown bust for a reason. The distillery produces a quality spirit, known for its fresh, salty, oily characteristics. Although traditionally softer than other Campbeltown whiskies (and therefore more attractive to blenders), Glen Scotia’s whisky is no less distinctive and has gathered a loyal following. Production was rather irregular until the distillery was bought by the Loch Lomond Group in 2014, who invested heavily in both hardware and marketing. The result was a new range of whiskies between 10 and 21 years old, instantly recognisable by the Highland cow on the front of the bottle. Since then, the range has changed yet again, with just three bottlings now making up the core range.

One of these is Glen Scotia Victoriana, meant to be a modern interpretation of what a classic Campbeltown malt from the Victorian era might have tasted like. To achieve this result, Victoriana has been aged in heavily charred oak and bottled at cask strength. The result is a deliciously rich whisky that packs quite some punch. Whether it’s is anything like the drams Glen Scotia used to make in years gone by is impossible to say, but if it were up to me, the distillery should continue producing whisky very much like Victoriana!

END_OF_DOCUMENT_TOKEN_TO_BE_REPLACED

Tonight I was invited to host a tasting for a group of 25 whisky enthusiasts at the local tennis club. As is almost customary for an introductory whisky tasting, we decided to journey through each of the Scottish whisky regions to sample what its distilleries have to offer. Although the Scotch Whisky Association formally only recognises five whisky regions, I decided six whiskies is better than five, so we added the Islands as a separate region.

What I find amazing about whisky is that it’s made using only three ingredients, which are transformed into a wealth of different flavours, the variety of which is truly mindboggling. Tonight’s line-up traverses this spectrum from grassy, delicate Lowland all the way to peaty Islay. While each of the whiskies was chosen because they embody their region’s style, they have also received different types of maturation, further adding to the diversity on offer. You can find a short description of the whiskies below, including a link to the full review. Slàinte! 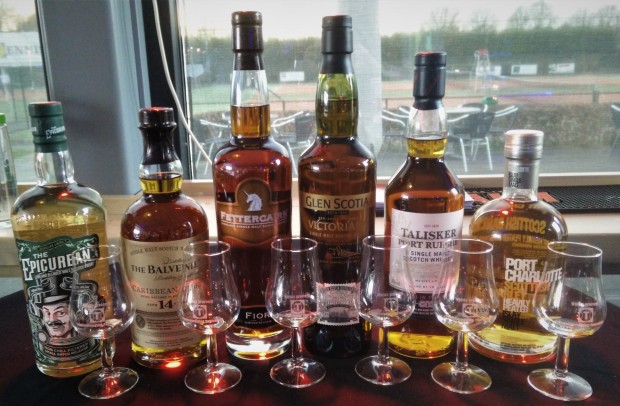 A fantastic line-up, ordered from left to right