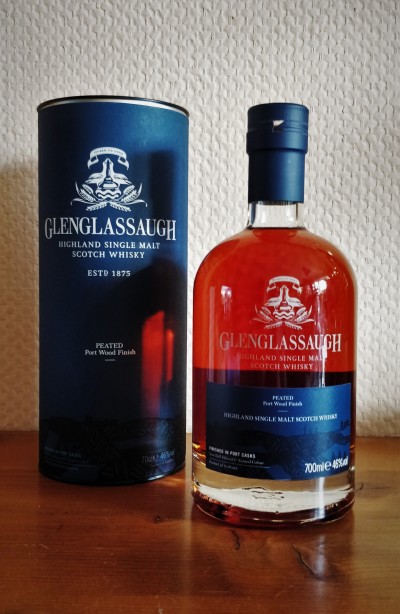 Throughout its turbulent history, Glenglassaugh distillery has closed and re-opened more times than I care to mention here. Since its last reboot in 2008 though, the distillery has gone from strength to strength. Whereas in past decades Glenglassaugh’s whisky featured mostly in blends such as Famous Grouse and Cutty Sark, these days its proudly bottled as single malt. Initially this was done through a small core range, but in recent years the distillery has also experimented with limited expressions through their Wood Finishes Series. This particular bottling was not only finished in port pipes, but also made from the distillery’s peated malt – the very same that’s used for Glenglassaugh Torfa. The result is something quite special, a delicious concoction of Highland peat and sumptuous forest fruits.

Nose: A pleasant mixture of fruit and smoke, not unlike cherry wood chips being added to a barbecue. A dash of white pepper accentuates an already pungent perfume… the fruit is really sorta in your face – but in a good way. Aromas of brown sugar and Armagnac make way for blackberries, poached pears and a whiff of cigar smoke. This is going to be an intense ride…

Palate: Oh hello! There’s definitely more smoke here than expected, although at first it’s still drowned out by raspberries and cinnamon. But then the fire begins to build, as the palate becomes hot and prickly, with notes of charred oak and peppercorn. By the time the finish comes along, we have ourselves a roaring bonfire, with smoke and embers flying everywhere.

Finish: How about that for an aftertaste? The finish comes in a relatively short, sharp burst, but the lingering flavour of tar and fruit-infused peat reek is an absolute joy to behold.

Verdict: Well, this isn’t quite what you’d expect from a port-finished Highlander, but what a positive surprise this Glenglassaugh has been! There’s plenty of intensity, as fruit and smoke do constant battle, yet somehow achieve a lovely balance. The result is a punchy, peppery dram, a brilliant combination of peat and port. This Glenglassaugh sits somewhere in between Talisker Port Ruighe and Laphroaig Brodir in terms of smokiness – and probably in overall quality as well. Given that those are both excellent drams, that’s by no means a bad place to be!