First things first, let’s get those pesky phonetics out of the way. For with Gaelic nothing is ever quite what it seems, and Garioch is actually pronounced Geerie. Its namesake glen earned fame as The Granary of Aberdeenshire for its rich, fertile fields and top quality grain. With barley in such plentiful supply, its perhaps not surprising that Glen Garioch distillery established itself here as early as 1797, making it one of Scotland’s oldest distilleries. Indeed, the barley profile is still very much present in Glen Garioch’s house style, with malt, honey and toffee shining through in many bottlings. Given all this, you might be surprise to hear that the distillery faced severe input shortages, but – unusually – the limiting factor was not barley, but water. Glen Garioch was mothballed in 1968 due to “chronic water shortages and limited production potential”, and subsequently sold off to Stanley Morrison, who also owned Bowmore distillery. He intiated a search for a new water supply, and struck liquid gold when a well was found on a neighbouring farm. The new water source was so good that production increased to ten times its previous level, facilitated by a new pair of stills.

Even so, Glen Garioch was not sold under its own label until 1973, and in those days the distillery produced a very peated drop of whisky indeed. Glen Garioch saw another closure in 1995 and since reopening in 1997, their whisky has been entirely unpeated. The distillery saw an overhaul too, with the traditional production process (on-site malting, direct fired stills, Douglas fir washbacks) replaced by state of the art equipment. Contrary to the early days though, now all Glen Garioch’s whisky is released as a single malt, and the distillery has gained something of a cult following. This 12 year old expression was matured in ex-bourbon and ex-sherry casks, and bottled at a hefty 48% abv.

Nose: Crisp and oaky, complemented by a pleasant sweetness. The aroma of tree resin and maple syrup gives way to buttery barley and pencil shavings. There’s some winy undertones too, as scents of stewed pear and hazelnut unfold.

Palate: Malty flavours aplenty, accompanied by vanilla and new wood.  Dry and fruity, this dram offers notes of fruitcake and raisins, before shifting to oatcakes and breakfast cereal. Enjoyable without ever being exciting, Glen Garioch 12 finishes off on its oaky side.

Finish: Long and likeable. A spicy character comes to the fore, leaving us with an aftertaste of nutmeg and white pepper.

Verdict: Glen Garioch 12 is a solid dram. Although it doesn’t stand out, it also doesn’t disappoint. The sherry influence is subtle, but makes for a welcome addition to Glen Garioch’s malty house style. There’s not much else to say about this whisky, other than giving the distillers props for bottling it at 48%. 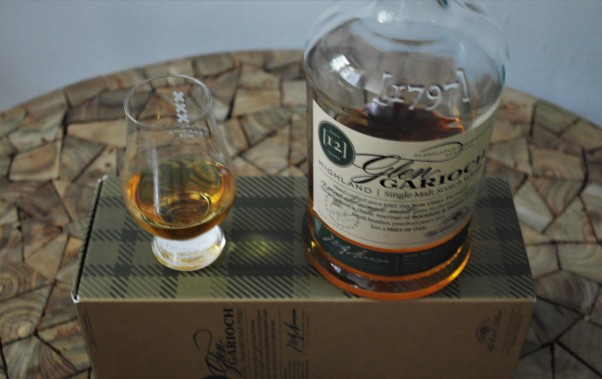