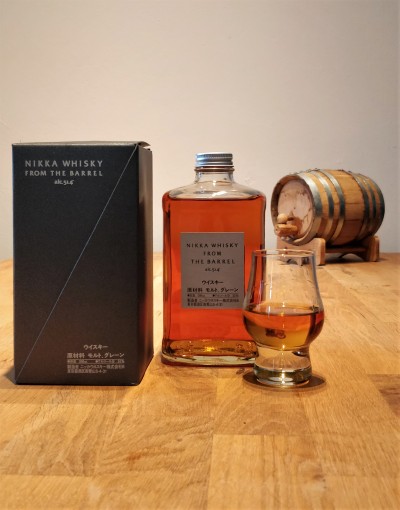 Launched as far back as 1985, Nikka From the Barrel was quite a novel concept at the time. In those days, Japanese whisky consumption was in steep decline and people were more concerned with price rather than quality. Most spirit being sold contained less than 25% actual whisky, with the rest of the mix being made up of blending alcohol. In this sense, From the Barrel was a strange fish in the pond, a whisky full of  flavour at a time when Japanese consumers preferred their whisky light and smooth. The bottling strength of 51.4% was almost unheard of in those days.

Nikka founder’s son Takeshi Taketsuru’s vision was to give the consumer a taste of how a master blender might experience a whisky in the lab. This perhaps explains the unconventional way of blending, and the somewhat confusing name of this whisky. Because Nikka From the Barrel is not in fact a single cask expression, but a blend of which grain spirit from Miyagikyo and malt from Yoichi distillery are the main components. Rather than blending the liquid in a large stainless steel vatting tank, Nikka From the Barrel is placed in… you guessed it: barrels. These previously used casks help to marry the spirit for about 3 to 6 months, after which it is bottled straight from the barrel.

The result is a rich and flavourful expression at a blistering alcohol percentage. Nikka From the Barrel has withstood the test of time, and remains an immensely popular bottling. The packaging is extremely classy, and I love how understated this Nikka looks. The chaps at Master of Malt have referred to Nikka From the Barrel as one of the best value for money whiskies in the world. Given the general price level of Japanese whiskies these days, that’s quite a statement. Is their claim justified? Let’s find out!

Nose: Extremely aromatic, with winey, oaky perfumes. It’s almost like someone liquefied a wine cellar and bottled it. From the Barrel showcases scents of raisins, walnuts and pencil shavings. These give way to aromas of stewed pear, mocha and a hint of cork. The result smells more like a cognac than a whisky, which has me quite intrigued.
With water, some of the pungency disappears, and this Nikka displays a sweeter, more floral profile, not unlike a crème de cassis.

Palate: Full-bodied and fiery. There are more sophisticated, winey flavours on offer, but this time they’ve been set alight by a conflagration of spice, with cinnamon and toffee warming the palate. The oaky notes are now toasted, infused with a sherry sweetness. Delicious!
Add a drop of water and From the Barrel loses some of its oily, creamy qualities. While this diminishes the sumptuous mouth feel, it does make the flavour bouquet more accessible, as well as distinctly nuttier.

Finish: Quite smooth for a whisky of this strength, with a pleasant aftertaste of vanilla and roasted cashews.

Verdict: Dynamite comes in small packages, so this Nikka was always going to be a blast. And indeed From the Barrel is packed full of flavours, a true explosion of dazzling Japanese pyrotechnics. While From the Barrel is almost best described as dense, if you add a splash of water it will show a friendlier, more elegant side. The result is a truly rich, rewarding dram that I personally can’t get enough of. If you’re after excellent, affordable Japanese whisky, look no further. Taketsuru had the right idea, this is really, really good stuff.

One thought on “Nikka From the Barrel”