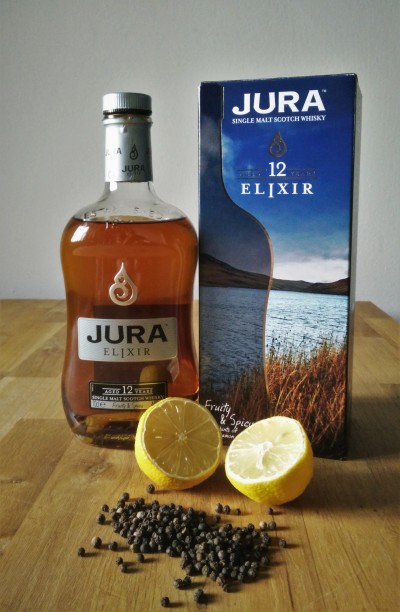 Evocatively named Elixir, Isle of Jura’s 12 year old expression sounds as beguiling as Water of Life itself. In this, Elixir fits right in with other Jura bottlings such as Prophecy and Superstition. Mystical marketing notwithstanding, Elixir’s only magical property is that it never fails to put a satisfied grin on the face of anyone who drinks it. Matured in a combination of ex-bourbon and Amaroso sherry casks, this Jura has been bottled at the sensible strength of 46%.

Nose: Briny and rather herbal. Aromas of cloves and autumn leaves give way to dates and stewed pears. There’s the slightly musty scent of old wood, mixed in with hazelnut and Werther’s Original. On the whole, quite mellow, but definitely inviting.

Palate: Medium-bodied and packing some serious wood spice. Notes of honeyed cereal combine with fruity flavours, with lemon peel particularly apparent. Certainly livelier than on the nose, but this always seems to be the case with Jura.

Finish: Long and peppery, with an aftertaste of dried fruit and toasted barley.

Verdict: Jura Elixir is a very likeable whisky. Its sweet, coastal character makes for an easy-drinking dram, while its spicy side offers a more engaging experience. Lacking in depth somewhat, Elixir is perhaps not as good as other Juras I’ve tried. What this dram does get right though is the price/quality ratio. Representing good value for money, Jura Elixir is well worth a try.