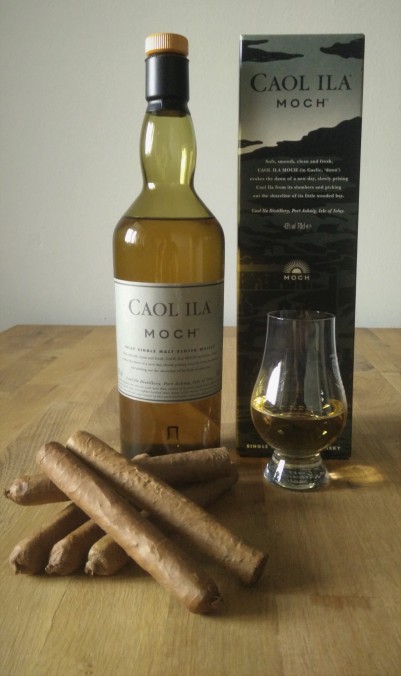 Gaelic for ‘dawn’, Moch is supposedly Caol Ila’s first ever whisky selected purely on the basis of taste, rather than age, bottling strength or cask type. Arguably this is just marketing fluff, since Caol Ila’s master distiller will have evaluated the taste of each of the distillery’s whiskies prior to bottling. Even so, there’s no denying that Caol Ila Moch is a very tasty dram. It provides a bit of a lighter version of Caol Ila, without compromising on flavour and complexity. The result is a dram that juggles a softer side with the bold profile we’ve come to expect from Caol Ila. Enjoy the balance of this elegant Islay whisky!

Nose: Expressive, as we are treated to a dose of beautiful Islay peat, with that lovely mossy, maritime tang to it. Quite citric in character, as green apples and lemon peel shine through, giving way to the scent of cooked ham. Soft notes of vanilla custard fuse effortlessly with harsher aromas of tar and hemp rope. So far so good!

Palate: Salty yet smooth. Dry, smoky flavours dominate, but without the medicinal kick that was promised on the nose. This is no problem though, as there is a nice, crisp wood smoke, like a bonfire on the beach. Notes of dried shellfish and white pepper guide this whisky towards the finish.

Verdict: Of all the Islay whiskies, Caol Ila is most easily overlooked. Perhaps it is because so much of the distillery’s sizeable production disappears into Diageo’s blends, but there does not seem to be as much of an appreciation for Caol Ila’s single malt as there is for some of its Islay neighbours. This isn’t justified though, and Caol Ila Moch is a great example of the what the distillery is capable of.

Although Moch is less powerful and antiseptic than Caol Ila’s 12 year old, it doesn’t feel like anything is missing. Moch’s softer flavours balance with just enough of the distillery’s boisterous Islay character to satisfy the senses. Moch does leave you wanting more however, so perhaps a refill or two are in order. Despite this, it’s a very rewarding dram that proves that more peat isn’t necessarily better, even for an Islay whisky. At a similar price point to the ubiquitous 12 year old, Caol Ila Moch is certainly worth a try.