Brexit. Who hasn’t heard of it by now? Britain’s attempt to rid itself of restrictive and overbearing EU regulations that have allegedly put a big dent in its budget. But while topics such as freedom of movement, a divorce bill and the Single Market regularly make headlines, Brexit also has many smaller implications that have escaped national attention. But that doesn’t mean there are no local concerns. One issue that Scottish people are certainly aware of, is the impact that Brexit might have on their whisky industry.

And this is hardly surprising, given the importance that whisky plays in the Scottish economy. Exports total around £4.25 billion per year, making up a quarter of the entire UK’s food and drink revenues. The industry supports around 35.000 jobs, with many more added indirectly through tourism. The Scotch Whisky Association (SWA) proudly states that “Scotch whisky is the single biggest net contributor to the UK’s balance of trade in goods, with the EU taking around a third of Scotch whisky exports.” While the first statement isn’t surprising (Scotland can’t actually import any Scotch whisky), the latter part is important. Because it is exactly this relationship with the EU that has fuelled concerns about the fate of Scotch whisky in a post-Brexit scenario.

Much has been written in the news lately about the legal definition of Scotch whisky, often citing a very concerned Scotch Whisky Association. As the industry representative, the SWA is responsible for governing the rules that whisky makers need to abide by if they are to call their product Scotch whisky. Requirements include things such as

There are many more requirements, including those related to labelling, packaging and advertising. The point is, while each of these requirements is written by the SWA, they are only legally binding because they are enshrined in EU law. These laws provide Scotch whisky protection from sub-standard products flooding the market, much in the same way that they do for champagne or Parmesan cheese. With a European divorce looming on the horizon, the fear is that these legal protections will fall away, leaving Scottish distillers open to unfair competition from all over the world. For example, American whiskies legally only need to mature for 12 months, while there is talk of relaxing these requirements even further. In many other countries, no such requirements exist at all. Without legal protection in place, anyone would be able to stick a label on a bottle and pronounce it Scotch, by which the reputation of the real stuff is guaranteed to take a big hit. 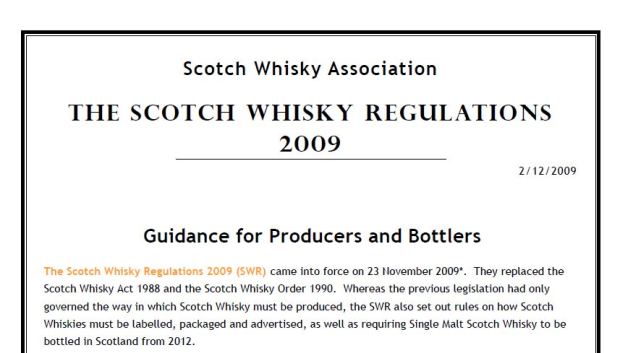 The first page of the Scotch Whisky Regulations…

However, don’t expect Scotch to be produced anywhere but Scotland just yet. As Forbes magazine points out, the UK government is preparing a bill that will convert the body of existing EU law into domestic law, after which Westminster chooses which of these laws to keep. It’s simply a matter of actually getting this done for the definition of Scotch. Given the importance of whisky exports to not only the Scottish economy, but the UK economy as a whole, it’s hard to imagine a situation in which this would not happen. So, despite the recent headlines, is Brexit just a tempest in a teacup – or in this case, a gale in a whisky glass – for the Scotch whisky industry?

Well, yes and no. Even if the doomsday scenario above isn’t likely to happen, this doesn’t mean that Brexit is devoid of consequences. It’s not without reason that whisky giants such as Diageo and Pernod Ricard vehemently opposed Brexit. This has much to do with the topic of free trade. Within the EU’s Single Market, whisky can be freely sold to any of its 28 member states. As you can see in the graph below, the EU currently accounts for around one-third of all Scotch whisky exports.

Surely this demand will not disappear when Brexit takes effect, but whisky producers may be faced with import tariffs when the UK leaves the common market. Similarly, the EU’s economic clout means that it has been able to sign lucrative trade deals with other parts of the world. For example, Scottish whisky producers currently enjoy a 0% tariff on whisky imports in South Korea, while the tariffs in Vietnam are gradually being reduced from 45% to zero over time. At the same time, the Scotch whisky industry bemoans the fact that the EU has been unable to break down India’s whopping 150% tariff on whisky imports, but whether the UK would do any better on its own remains to be seen. There certainly is little doubt that Brexit would jeopardize some hard-won market access for Scottish distillers. In addition to higher tariffs, importers may expect extra paperwork and other complexities at the border, which are set to increase costs. Sure, new trade deals can and will be negotiated, but this is a lengthy process that can take years to complete. At the very least, it’s fair to say that there are very few tangible benefits to Brexit for Scotch whisky.

So, how does this impact us as consumers? Will we all be drinking Mackmyra or Connemara soon? Probably not – although they are fine whiskies. But fact is that costs may rise in an industry where margins are already small. Inevitably, these extra costs will be passed on to the consumer. As an EU-based whisky fan, I’m not thrilled by the prospect of having to pay extra for my Scotch. Understandably, sentiments like these may lead to a slowing growth, particularly in the emerging Asian markets which account for much of the whisky boom we are witnessing currently. It may even lead to less of an appetite to start new distilleries, reversing the trend of past decades.

For now this is all just speculation of course, and it’s good to point out that Scotch whisky has survived far worse. Two World Wars, Prohibition and a Great Depression weren’t enough to dampen the spirits of Scottish whisky makers, and it’s unlikely that Brexit ever will. Even so, distillers and whisky fans alike will be keeping a keen eye on the tug and pull between Brussels and Westminster in the years to come. Perhaps a nice dram of Scotch could help smooth out the negotiations..?