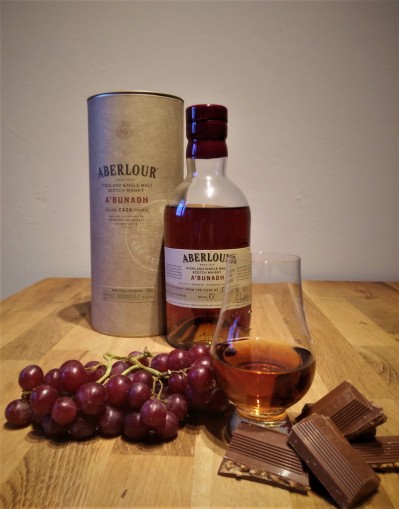 The story of A’bunadh (meaning The Origin in Gaelic) is an interesting one. How much of it is marketing and how much is truth is hard to say, but the tale goes as follows.

Business was booming in the 1970s, so Aberlour decided to put in a new pair of stills in 1975. When installing the stills, workmen had to remove a name plate, behind which they discovered a time capsule. It was a bottle of Aberlour wrapped in a newspaper from 1892, containing an article about the fire that destroyed the original Aberlour distillery. Although the workmen reportedly emptied out almost the whole bottle, the leftovers were duly handed to the distillery manager, who sent the sample to the lab to be evaluated. The lab results showed that the dram was a marriage of whiskies of different ages, all matured in European oak and bottled at cask strength.

Aberlour A’bunadh is an attempt to recreate this whisky and celebrate the origins of Aberlour. Since only a handful of people ever tasted the original I can’t say whether they succeeded, but oh my have Aberlour created a wonderful dram! A’bunadh is bottled in different batches, each very similar but subtly different. All batches are a vatting of different Aberlours, ranging in age from 3 to 30 years. With the exclusive maturation in European oak, A’bunadh is the ultimate sherry aged whisky, positively exploding with sweet, spicy flavours. Add the high alcohol content (this batch is one of only a few to fall short of 60%) and you have a truly special whisky that is unquestionably the crown jewel in Aberlour’s range.

Colour: Mahogany. The deep burgundy hue is amazing given the fact no artificial colouring was used. This already gives an indication of what a sherry bomb this whisky is.

Nose: Deep, oaky aromas dominate, much like a VSOP cognac or a very old tawny port. The sherry smell is so heavy I’m surprised it doesn’t sink right through the glass. The nose is fruity, but not fresh, with lots of raisins and dried red fruit. A somewhat musty scent gives way to a nuttier profile, with notes of walnut, caramel and sandalwood. These slowly dissipate into dark chocolate and strawberry jam.

Add a few drops of water and the nose opens up, increasing in sweetness and producing aromas of honey and marzipan. There is more of a citric character too, as notes of orange peel give way to barley and cloves.

Palate: Cloyingly sweet, with a large, creamy body that is nonetheless very sharp. And how could it not be, with such a high alcohol content? This dram feels like you’re drinking liquid oak that’s on fire, a sherry B-52 cocktail of Christmas cake mixed with butterscotch.

With water, the palate is less prickly, allowing you to enjoy the sherry character a bit more. Unwatered, the alcohol doesn’t quite drown out the flavours, but it is easier to explore this whisky with a splash of water.  Adding just a few drops really allows the nuttier, barley-flavoured side of this whisky to shine through.

Finish: Intensely warming, sharp, spicy and deliciously long. Again, there are massive sherry notes, with a nutty, oaky aftertaste that lingers long at the back of the throat. A’bunadh is a superb whisky that Aberlour can be extremely proud of. It’s like no other whisky out there, truly ground-breaking stuff. With water, the aftertaste remains the same, but the finish has less of that warming, explosive impact.

Verdict: What a dram this is! Aberlour A’bunadh is a bold statement that takes sherry matured whisky to new extremes. As such, it is the perfect whisky to finish off a sherry themed tasting, as it’s almost impossible to find anything that will top this for sheer taste and intensity. A’bunadh is one of those whiskies (like some of the heavily peated Islays) where you can still enjoy the glow and the aftertaste long after you’ve finished your drink. The fact that it’s one of the very few Speysides of which I can say this, illustrates how special this dram is. By now, A’bunadh is becoming a true classic, and a bottle that will always have a place in my whisky collection.  All thanks to someone with the brilliant foresight to hide a time capsule all those years ago… 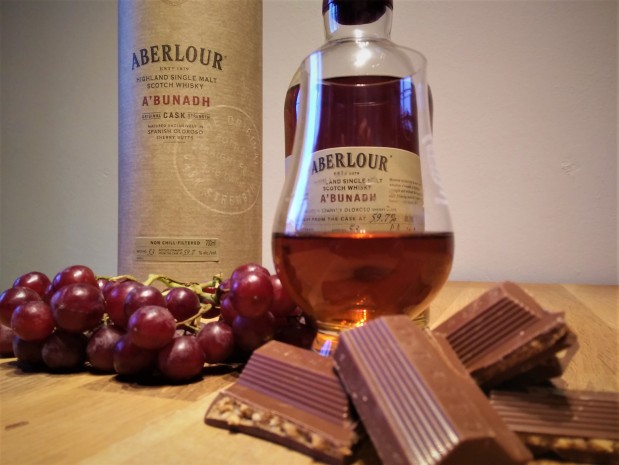