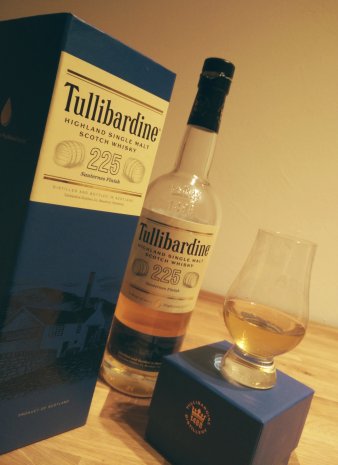 Established in 1949, Tullibardine was the first distillery to open in the 20th century, after some extremely difficult decades for the whisky industry. Don’t be fooled by the 1488 indicated on the box, this is merely marketing: supposedly King James IV had a beer at a brewery located roughly where Tullibardine distillery now stands. Either way, a rich heritage is not required to make good quality whisky, and Tullibardine has some fabulous drams on offer indeed. This particular whisky was aged in first-fill bourbon barrels, before being transferred to casks that previously held Sauternes.   Sauternes is a sweet white dessert wine made in the Bordeaux region of France. In this case, the cask was previously filled with 225 litres of Château Suduiraut Premier Cru, lending sweet, fruity flavours to this whisky. While I’m not a fan of Genmorangie’s Nectar d’Or, I was more than happy to give Sauternes finishes another try.

Nose: Distinctly winey, smelling more like brandy than Scotch. Scents of dried nectarines and lemon peel suffuse into the aromas of shortbread dipped in vanilla custard. Underneath hide some very subtle herbal undertones, with perhaps a waft of lavender jumping out.

Palate: Fairly subdued, with notes of marzipan and crushed almonds attempting to break through the somewhat obtrusive layer of Sauternes influence.

Finish: Medium in length. Finally the full bouquet of flavours opens up in a burst of spices, with nutmeg, pepper and cloves coming to the fore. This is followed by a mix of honeyed cereal and dried fruit. The aftertaste is bitter, like very dark chocolate.

Verdict: A pleasant enough dram, and interesting to try something different to the customary sherry or port finish. Having said that, the Sauternes influence is rather overwhelming in this whisky, and doesn’t leave much room for other flavours to develop. This is a shame, as Tullibardine produces quality spirit, but the distillery character is somewhat lost in this dram. Unfortunately then, this Premier Cru finish did not result in a premier whisky.

One thought on “Tullibardine 225 Sauternes Finish”