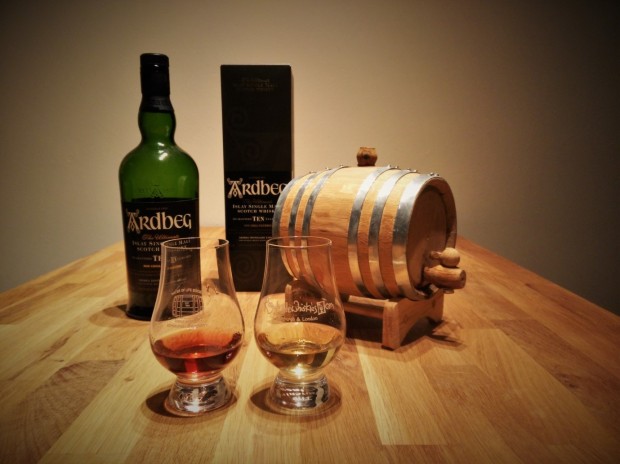 For this next batch, I filled the cask with port first, to finish the Ardbeg 10 year old in it afterwards. I chose a ruby port for the job, as these do not previously age in oak casks and therefore retain the full, fruity flavours I was looking for in my Ardbeg Port Finish. I let the wood soak up the port for just over two weeks, after which I emptied the cask.

I am no great connoisseur of port, so I won’t bore you with taste profiles of the versions before and after maturation. Suffice it to say there is a very noticeable difference in flavour, with the matured port having much more depth and character.

Now for the exciting part, filling up the cask with Ardbeg 10 year old. As usual, the barrel took in about 1.1 litre of liquid, which I then stored in my shed for lower temperatures and less evaporation. When I checked on the liquid after just one day, the Ardbeg had already taken on a reddish colour, as it mixed with the port that was absorbed by the wood of the cask. I intended to take a sample each week for a month, but decided the whisky had already matured enough after just two weeks. As described in previous posts, the fact this barrel is so small and was until recently unused means that the maturation process is incredibly quick. Since I did not want to lose Ardbeg’s unique flavour profile to the influences of the cask altogether, I emptied out the barrel and with great anticipation sat down for a tasting.

As you can see from the pictures, the Ardbeg changed colour massively after just one week in the cask, as it mixed with the port residue left in the wood. Interestingly enough, after two weeks, the liquid was in fact slightly less red than before. I can only assume this is because the wood itself imparted some of its colour to the whisky, turning the colour a slightly less bright shade of red. Overall, the colour is comparable to a fairly dark rose wine.

On the left is the original Ardbeg 10 year old. The middle glass has received one week of extra maturation, while the glass on the right was finished for two weeks.

On the nose, the Ardbeg Port Finish is immediately less sharp and smoky when compared to the regular 10 year old version. Although still clearly recognisable as an Ardbeg, vanilla notes now dominate, mixed with the scents of dried red fruits. It is interesting to see that the oak from the cask in fact had more impact on the nose than the port that the cask held previously. After one week, there was still a slight hint of the Corenwyn from the initial batch. This translated into spicy notes of cloves and nutmeg, but these were fortunately less noticeable after two weeks.

The difference in colour between the original Ardbeg and the Port Finish is immense.

In terms of flavour, after one week the port finish wasn’t at all an improvement over the Ardbeg 10 year old, being a slightly restrained, sweeter version of the original. While not a bad whisky, it tastes like an Ardbeg 10 year old with unwanted interference. After two weeks however, things are quite different. The extra week of maturation allowed the liquid to become more of a whisky in its own right, as the Port Finish is now quite different from the original. Expectedly, there are more oaky flavours, as well as a distinctive winey influence. The initial swell of honey and vanilla gives way to notes of fruit cake topped with strawberry jam. The body is drier and more smooth, and the customary Ardbeg peat explosion has been tamed somewhat. While this is not necessarily a good thing in my book, the additional maturation has given an extra depth and complexity to this otherwise straightforward peat monster. While I am unsure whether my Ardbeg Port Finish is better than the original 10 year old (which I find very hard to beat), it is a very pleasant dram, and one that proudly holds its own in my extensive collection of Ardbegs. I certainly don’t mind having a litre of the stuff: while I can always go and buy more Ardbeg 10 year old, this Port Finish is a single (tiny) cask bottling, once again demonstrating the amazing impact that maturation can have on a whisky.

My very own Ardbeg Port Finish!

Interested to try it out for yourself? You can buy the cask here at Master of Malt.