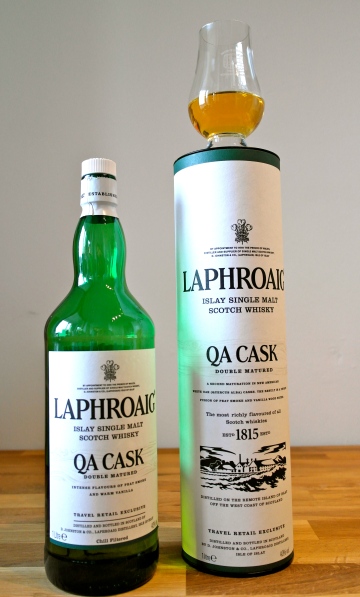 Although offered as a travel retail exclusive, Laphroaig QA Cask is thankfully becoming more widely available. QA refers to Quercus Alba, the scientific name for American white oak. After an initial period of maturation in the customary ex-bourbon casks, this Laphroaig was transferred to new American oak casks. The result is a much softer, sweeter Laphroaig than usual, as the virgin oak smoothes out a lot of the rough, peaty character. To experiment with a tamed version of their whisky, Laphroaig therefore decided against lowering the peat level in their barley (as was the case for the ill-fated Ardbeg Blasda for example), and instead opted to let the wood do the work. This is a decision that has worked out wonderfully well and this Laphroaig is certainly worth a try!

Palate: The peat flavour becomes more prominent, but is beautifully balanced by the vanilla influences. The body is smooth and somewhat buttery, accompanied by notes of cured meat. Although this is a much tamed Laphroaig, the characteristic distillery flavours of seaweed and iodine still shine through.

Finish: Massive. Sweet, woody flavours burn down into cinders of ash and smoke that linger long after the last drop of whisky is consumed.

Verdict: This whisky has a sweet, amiable character and is one of the friendliest Laphroaigs out there. The traditional big kick of peat and brine has been much smoothed out by the influence of the virgin oak casks. The result is a fantastic whisky that perfectly balances Laphroaig’s big, peaty profile with flavours more often found in bourbon. Although this marriage of sweet and fierce takes some getting used to, the QA Cask is fast becoming one of my favourite Laphroaig expressions.