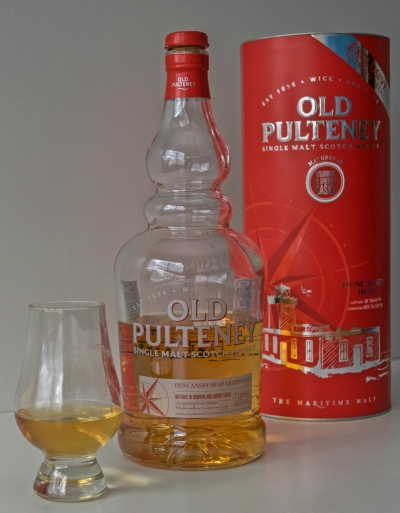 Named after a lighthouse near the distillery town of Wick, Duncansby Head forms part of Old Pulteney’s travel retail Lighthouse Collection. Like so many other travel retail expressions, this is a no age statement whisky. It has been matured in both bourbon and sherry casks and aims to combine the distillery’s maritime character with richer, fruitier flavours.

Old Pulteney is the northernmost distillery on the Scottish mainland and was established in 1826. At this time, the distillery was accessible only by sea. Coupled with a strong fishing tradition, Old Pulteney is proud to have retained some coastal influences in its whisky. Expect tangy, salty notes from this award winning distillery.

Nose: Pungent, with dominant notes of lemon and fresh fruit giving way to a hint of raisins. Evokes the promise of spring.

Palate: Lots of vanilla from the bourbon cask, before the salty distillery character is allowed to break through. Zesty citrus fruits are replaced by a trace of dark chocolate.

Finish: Long and very sweet, with honey, spices and more vanilla. Ends with an impression of fresh wood shavings.

Verdict: While this is a dangerously drinkable whisky, I would have liked the sherry influences to offer a bit more. As it is, the added layer of sherry maturation doesn’t really shine through. Nonetheless, this is an engaging whisky in typical Old Pulteney style.  At £45, Duncansby Head is not the greatest of bargains, but considering you get a full litre still well worth it.